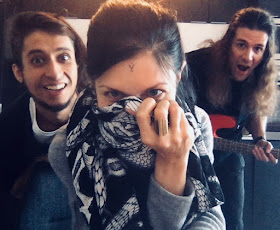 Canadian rock band VAYA have released their double album of content, with newer music in the creation process. Some shows played with more coming up, there is no stopping this trio act, who does nothing but talk on themselves, music, and more!


1. Please tell us about the history of your band and its members.

Hi Natalie. So actually VAYA is not a band, it s a project ruled by the spirit of the pack, wolf pack. From the beginning I was alone with the blow of Inspiration. Then arrived from France a first composer we worked on songs I’ve written. And he had to stop so the flow met Attila , a Hungarian musician I’ve work with on most of the musical studio arrangements in Geneva ( he just arrived for a couple of months from Romania) and then the live songs were amplified by the strong touch of Sebastian from Chile with his  hard core, rock metal spirit. And today we are three strong heads, Philippe, Raphaël and me, carrying the project on our shoulders to make it screams and blows on scenes everywhere on Earth.  So it’s a real eclectic story and it will grow up more and more like that on keeping the three high heads and welcome new vibes from other great spirits for the next tours, shows and second album.

2. What’s the origin of the band’s name?:) Have you ever heard about the White wolf Legend? So just have a look on the VAYA’s Lyrics, you will find the answer:)

3. Where is the band based out of and what is your music scene like there? Are there any local bands you could recommend?

So for all the start process VAYA was based in Switzerland: VAYA just moved in Toronto now for having a new breath and energy first for composing and then for developing it’s Legend. To be honest I was surprised that Swiss people really appreciate our music:) They are waiting for our come back;)
Raphaël, our drummer, would recommend FIXIT as a really kind rock local band.

4. How would you describe your style?

5. What have you released so far and what can someone expect from your works?

Our first double album is just out from Jun, a physical limited edition, numbered by hand from 1 to 1000 to make it as a unique piece. What do you should expect from it? It’s just a piece of you and I (ELEPHANTUS/ album track).

6. Do you have any new music in the works?

Sure :) I wrote some in tour this summer and will compose new one I’ve yet written here in Toronto . So the process will begin on November after our shows in Canada in my home studio with Prophet keyboards, bass, guitar, drums, voices and and and :))))))!

7. How about playing shows and touring, have anything planned out?

Sure as I said we just finished our summer tour in East of Europe, then finishing now some lives in Canada and will continue in Spring between Canada and USA. Winter is a good season for creating. :)))

8. What plans do you have for the future as a band?

So can have an idea of our music on our official website: www.vaya-official.com. And you can buy there online your double album where you will find a part 1, studio record versions, part 2, live recorded and choose your lucky number. :) You can also find t-shirt we are selling too on live shows.

10. What is it you’d like a listener to remember the most when hearing your music for the first time?