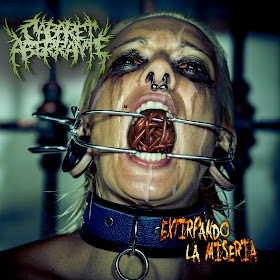 Cabaret Aberrante began sometime ago, releasing a handful of albums, including their fourth to date titled "Extirpando la miseria" in 2018. This follow-up to their array of previous albums and a demo release, was quite intense and shall we say catchy as well.

The release consisting of nine tracks in length, reaches the listeners, in a more different approach than your average death metal band would do so. The way of how Cabaret Aberrante does it, has them create the music, allowing for it to be constructed in a mannerism, that makes it heavier, more in-depth and rounding to the ear. In other words, the melodies of the numerous tracks offered, creates difference, guitar riffage, solo working's, just content that makes the music very unique. Whilst the vocalization falls along the lines of sounding a lot like Cannibal Corpse's styling.

Upon listening to this release, each and every one of the tracks off it, just carried a difference between them, making them be not the same, which was nice, whereas a lot of other metal content releases by acts, tends to have each track sound just like the one that came before it. Each of the tracks off of the "Extirpando la miseria" album, varies, making the material sound much refined yet fresh with each play through. Another notation is that the material at hand, has this tone that makes the headbanging or mosh pit variety very open. Surely any metalhead will be quite pleased with the fastness and appeal.

All in all though, Cabaret Aberrante’s fourth album "Extirpando la miseria", has a share amount of moments, for each of the tracks to come off, including such as "Lamiendo los cortes", "Nido de parásitos", "Estáis todos condenados", and "Degüello masivo". One shall not be disappointed by their spectrum of the metal kind that is death metal.
Natalie at 5:34 PM
Share