Screamking - Tyranny of the Sea 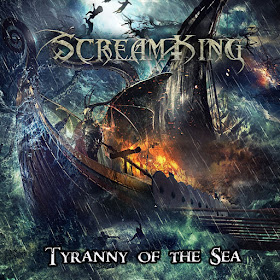 All was coming up for the Screamking, as 2011 would see them play their first live performance, following a year later in 2012, the band entering the studio to write and record for their first debut full-length album titled "Evilibrium". After that release was seen passable Screamking went on to perform more showcases and or tours with various acts both big and small. Come sometime later had passed on, 2016 would see the band yet again entering the studio domain to write and record for the sophomore follow-up album release titled "Tyranny of the Sea", as this would literally make huge waves for the band, throughout the music world and it's metal world as well. In short, their music this time around would take in the crowd of fans, showing off of loud and potent music, with an all new listening experience as it were. As it would have it, Rafel Hernandez and Joe Lawson would be producing and mixing the album, as the band had worked with the duo previously, while mastering would be done by Jon Scrip, with the artwork done by artist Drake Mefestta. That said though, "Faith Weapon", would be so fitting as the single of choice, turned video release for this album. As it contains just the right amount of aggression with melodic heavy metal feeling, that will keep the listener at ease yet entertained. While other tracks including "I Am A Viking", will have you singing along, to "War Horse", just being the power titan of sorts, as "Embrace The Hate", keeps the aggression repeating itself, as the album cycles on through. Truly this is an album, that will take in that heavy metal feeling, really embracing the metal music for what it is worth.
Natalie at 1:17 PM
Share