Ghosts of Sunset Says Lots on Music Coming Up Soon! 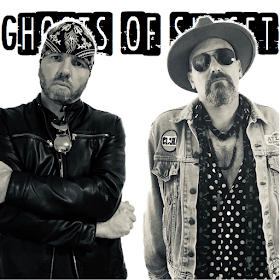 Hard rock band GHOSTS OF SUNSET have a current single, with a follow-up single expected this fall, along with the release of their debut EP "Headed West". Aside from all of this though, the band is hard at work on all new material as well. The band will go on to say lots more about their music and themselves.


1. Please tell us about the history of your band and its members.

Ghosts of Sunset was an idea that my partner John Merchant had. He had the thought of doing a concept album of a fictional Midwest/East Coast band that had gotten too big for their city and wanted to take their chances in Hollywood! He asked myself (Todd Long) to be a part of it. John and myself had been in band together since we were in high school. It was a no brainer to jump aboard!
John Merchant is singer/songwriter from Michigan and I (Todd) am an Alaskan transplant of recent.

2. What’s the origin of the band’s name?

We got our name “Ghosts of Sunset” from the long history of the Sunset Strip artists in Los Angeles, California. We love the hard rock of the 1980’s and that is what we are based off of but there is so much more history then that. The Doors, The Byrds, Jackson Browne etc!

The band is split up into two different areas right now. John is in Ludington, Michigan and I am in Anchorage, Alaska. We do all of our writing via file sharing. There are some band from Alaska that have went on to do some great things. 36 Crazyfists and Portugal The Man come to mind. I don’t really see or hear of an “Original” band scene here . A ton of places to play cover band shows though.

4. How would you describe your style?

Our style is in the realm of the late 1970's to mid 1990's hard rock. We definitely love the hard rock sound so that just sort of flows out of us! We both grew up in that era so it is very inspirational. We try to put a modern take on it but what comes out comes out. We try to think about it but we don’t want to overthink it!

5. What have you released so far and what can someone expect from your works?

We just signed a deal with GOLDEN ROBOT RECORDS out of Australia. Our first single “Miles In-Between" is getting some good response and we are trying to capitalize on that the best we can, although Covid-19 has hindered everything! The second single “Never Goodbye” drops on October 12th! The E.P titled “Headed West” will come out on November 13th!

6. Do you have any new music in the works?

We are currently writing songs for our second release and have two songs written and recorded for that! We are hoping that our first release does well enough that Golden Robot will pick us up for a second one!

7. How about playing shows and touring, have anything planned out?

With the pandemic upon us we are kind of in a holding pattern. In our contract it talks about touring so we are hoping that we will be able to get out and play some shows. There was discussions about doing fly in dates and opening for bigger named acts. I guess we will see!

8. What plans do you have for the future as a band?

Right now it’s just writing new material and trying to stay up on our game as much as we can!

Spotify, Apple Music, iTunes, YouTube, Soundcloud. Search for Ghosts of Sunset on all of  the usual spots for streaming.

It’s music that takes you back to a time when music was fun! Has that old vintage feel with a modern twist!
Natalie at 8:30 PM
Share